Having supported England’s NHS Health Check Programme for around a decade, Health Diagnostics’ support teams have been exposed to an unparalleled array of queries from providers and commissioners. One of the more common (as well as more challenging) questions that our teams get asked is “when looking to determine a trans person’s cardiovascular risk score using the QRISK®2 algorithm, how should their sex be classified?” The answer is not straight-forward; this blog post addresses why that is the case and proposes recommendations for how such situations may be approached.

In terms of the context, QRISK®2 is an algorithm used in the UK to calculate an individual’s ‘heart age’ as well as their risk of developing cardiovascular disease (CVD). Public Health England state, in their national guidance, that this tool should be used during NHS Health Checks to inform individuals of their CVD risk and identify any necessary next steps for further treatment. As such, Health Diagnostics licence the algorithm from its creators, ClinRisk Ltd, and make it available to providers up and down the country via Health Options® software so that it can be utilised to deliver patient-focused health checks both in community and GP settings.

Despite its advantages, a limitation of the QRISK®2 algorithm is that it only allows for a binary gender split; providers are able to choose only from ‘male’ or ‘female’ options. Given that trans individuals may be unlikely to wholly identify with either of these categories, an important question is raised around what appropriate action might look like. With Health Diagnostics due to soon begin supporting a specific NHS Health Check project aimed at reaching out to members of the LGBTQ community in the South East of England, now felt like as good a time as any to address this illusive issue head-on.

The role played by gender in determining a person’s cardiovascular risk is significant. Indeed, according to Geoff Curtis – Training & Development Lead at Health Diagnostics – “it’s actually one of the most important influencing factors that needs to be considered. The reasons for this are quite complex and are due to a variety of lifestyle and biological influences, such as the fact that women have, on average, a higher lifelong level of HDL (‘good’ cholesterol) than men, which appears to be partly explained by sex hormones. This can translate into a more favourable ‘Total Cholesterol to HDL ratio’ and therefore contribute to a lower CVD risk.”

As a result of these constitutional factors, QRISK®2 treats males and females very differently when generating CVD risk results, the extent to which is shown by the graph below. Curtis, who uses this graphical information during Health Diagnostics training sessions to convey the importance of gender, explains that “the QRISK®2 results represented by the graph’s lines are identical in everything other than gender. Despite this, you can see really significant differences in cardiovascular risk, differences that actually become more pronounced as people age.” 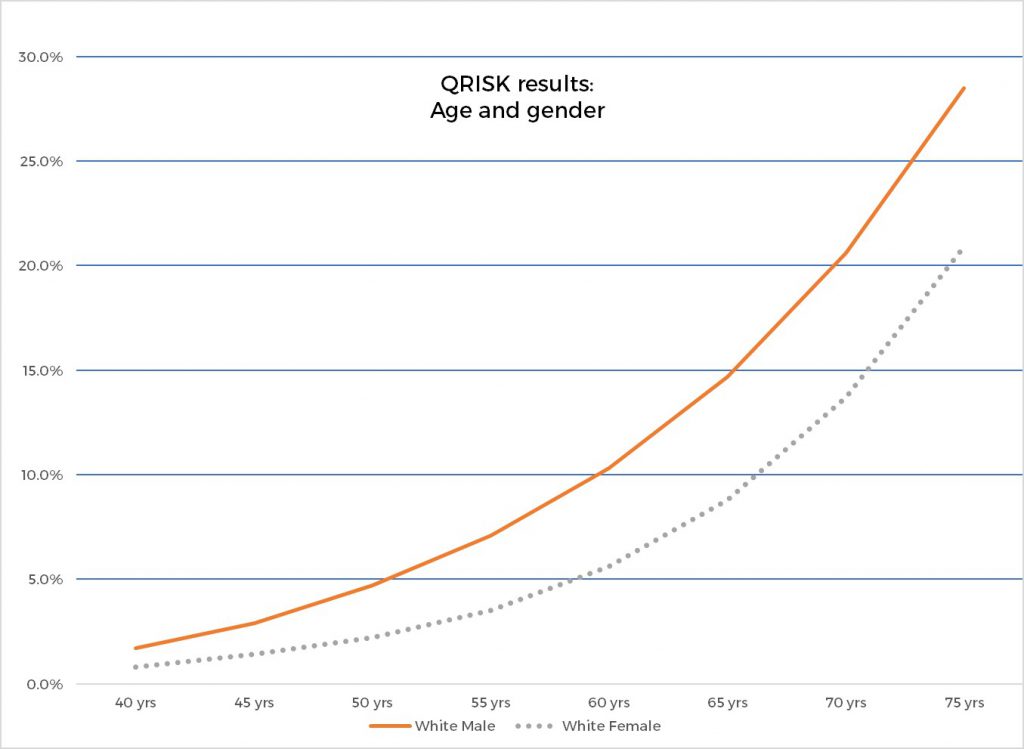 Portraying this discrepancy another way, an individual’s gender can have such a significant impact on risk that two 58 year-old people – one male, the other female – with an otherwise completely identical set of demographic criteria and NHS Health Check results, can nevertheless differ in terms of their QRISK®2 scores by as much as 6.5% (as is shown below; N.B. these results are different and generally ‘higher risk’ by comparison to those used when generating the above graph):

1 in 5 chance of a heart attack/stroke

1 in 7 chance of a heart attack/stroke

The dilemma with trans individuals

With such discrepancies in CVD risk scores between men and women, a provider’s decision as to how to proceed with an individual that cannot simply be categorised as either ‘male’ or ‘female’ can have significant implications for that person’s on-going health and support. The sex that’s selected could, in fact, affect a CVD risk score to such an extent that a whole range of referrals may (or may not) be instigated for a client solely on the basis of this gender distinction.

Providers are therefore faced with a dilemma when encountering transsexual individuals: do they privilege the person’s chosen and stated identification (even, for example, if gender reassignment surgery has only recently taken place and that person has spent much of their life as another gender)? Or, alternatively, should ‘sex at birth’ function as a guiding principle in these situations? The answer is not clean cut; such scenarios, first and foremost, require care and tact on the part of the provider.

Whilst the argument may be made that, on the basis of clinical accuracy, the provider should ask the client for their sex at birth and/or the gender that they’ve spent the majority of their life as, this approach is not without potentially significant risks. For example, if the client in question has been involved in a long struggle to live their life and be recognised as a certain gender, a health check provider insisting on a classifying that person differently to how they self-identify could do irreparable damage to the provider-client rapport (precisely that which can be so crucial to promoting behaviour change). Indeed, in such circumstances, the client may feel alienated and ‘deadnamed’ to such an extent that the consultation may prove to have substantially less of an impact than may have otherwise been possible.

Given what’s at stake, the recommendation of Health Diagnostics would be for providers, in the first instance, to record the chosen gender reported by the individual. However in addition – and this aspect of the consultation is where the provider’s tact becomes indispensable – we would also emphasise the importance of showing the client the results for both genders. The likelihood is that, depending on the particular circumstances of the trans person in question, their risk estimation will likely be somewhere in between the results presented, (the precise point of which is dependent on a range of factors such as when the person had their operation and when their hormone replacement therapy was undergone). For a full discussion of the clinical implications of gender reassignment on CVD risk, see The Centre of Excellence for Transgender Health’s web pages

Health Diagnostics include instruction on how to complete this action practically using Health Options® software (i.e. the process of changing the gender at the end of a consultation and showing both) as standard during training sessions and in learning materials. What’s more, this approach is corroborated by guidance issued by certain (albeit very few) public health authorities within the UK. East Sussex County Council, for example, state that “patients who disclose gender reassignment, should have their gender recorded as the gender reported by the patient, but they should be provided with a CVD result for both genders and see their GP to discuss which results are most appropriate for them as an individual.”

Ultimately, the hope is that working in this way may allow for providers to maintain rapport with their client and facilitate the development of trust in the information being communicated, whilst simultaneously demonstrating the potential clinical ramifications that sex and gender reassignment can have on CVD risk. Despite posing technical challenges to providers and requiring skill, the potential positive impacts on clients’ health and wellbeing unquestionably justify this investment on the part of those delivering health checks.