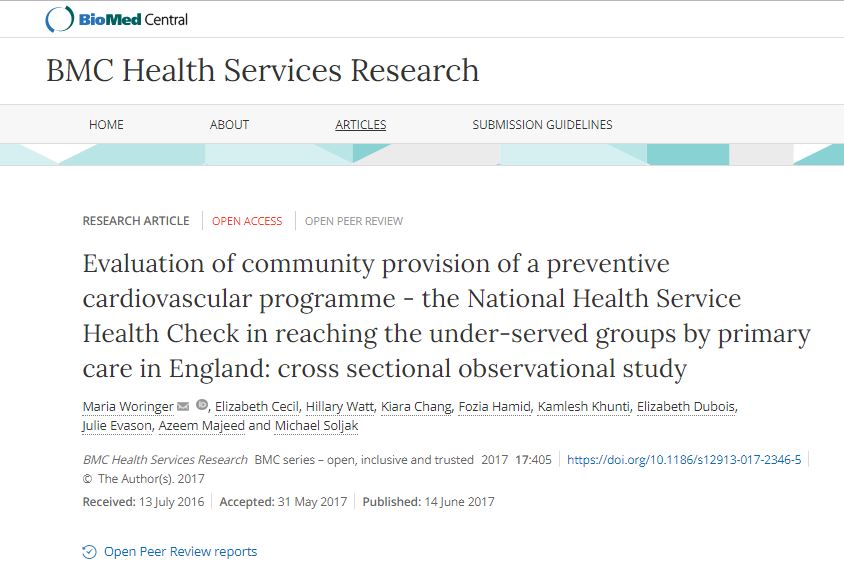 An outline of ICL’s findings

Researchers from Imperial College London (ICL) have found that community providers of NHS Health Checks are able to “effectively reach under-served groups by delivering preventive CVD services to younger, more deprived populations, and a representative proportion of ethnic minority groups”. According to the authors of the study, implementation of the delivery model examined could ultimately lead to a reduction in the pervasive health inequalities associated with cardiovascular disease (CVD).

Researchers analysed data from 43,177 NHS Health Checks conducted by community outreach providers working in 38 local authorities across England. Providers used Health Diagnostics’ solution, including Health Options® software and point-of-care testing equipment, to conduct the NHS Health Checks. This combination allowed for instant results and informed consultations. Crucially, the results indicate that the model of delivery under consideration allows for the effective targeting of precisely the groups which have traditionally been deemed ‘hard-to-reach’, members of which are often amongst those most at risk of developing CVD and other lifestyle related conditions.

The unprecedented scale of the study means that the findings represent a major contribution to the evidence base for CVD prevention. What’s more, the conclusions firmly point to the benefits of doing things differently in terms of ensuring that prevention programmes effectively reach those that may be underserved by routine healthcare delivery systems. Health Diagnostics has provided technical support to ICL on the study and Julie Evason – Managing Director at Health Diagnostics – is a co-author. For the full study, please visit: https://bmchealthservres.biomedcentral.com/articles/10.1186/s12913-017-2346-5

Q: What drew you to the NHS Health Check programme as an important topic in need of study?

A: There have been repeated calls for researchers to expand the programme’s evidence base and we felt that it was crucial to study the NHS Health Checks from the perspective of how they’re affecting health inequalities. Our goal with this has ultimately been to help the programme target those most in need. In addition, Public Heath England (PHE) have strengthened their commitment to reaching out to more deprived areas and ethnic minorities as a way to target people at higher risk of CVD.

Q: And this support from PHE encouraged you as a researcher?

A: Yes, I thought it was a good decision from them. Whilst we can’t really say whether health inequalities are going to be reduced outright at this stage – for this you’d have to look more long term – our research does definitely show that local provision of the NHS Health Check is addressing some of the determinants of health inequalities.

Q: How could you research whether health inequalities are being reduced outright?

A: That would be a different analysis. You would need to look at the impact of the programme on the people it served; investigate their perceptions and long-term conditions. We’re actually conducting another study at the moment which is examining how the health check affects peoples’ attitudes and beliefs about CVD. The thinking is that an individual having accurate knowledge is in relation to their CVD risk has a big effect on how empowered they are to do something about their lifestyle. The indications are that there is indeed a correlation between peoples’ perceptions and their actual CVD risk after they’ve had their health check. We’ll be elaborating on this in research that’s hopefully due for publication soon.

Q: Can you say a bit about why you decided on a large-scale study design for the research recently published?

A: There have been a lot of local studies done that have looked into provision in a single area. However, there’s been very little conclusive work done that could apply to more than one locality at a time. It was Dr. Michael Soljak’s idea to design a study that looked across numerous local authorities; this is what we did.

Q: What are the challenges associated with conducting a large-scale analysis in this way?

A: You’re able to get a larger sample size however it’s more difficult to say how and why the local strategies might have been successful on the whole. In essence, it gives more aggregated results but loses some of the detail. One of the advantages of analysing data supplied by Health Diagnostics was that – due to the organisation’s consistent approach to supporting local authorities, the fact that the system was developed specifically for conducting health checks, and due to the routine checks that data underwent – the completeness of the datasets that we analysed was very good. This often isn’t always the case with data gathered using clinical systems.”

Q: What sorts of challenges could be posed by missing data?

A: Well imagine what a missing cholesterol result might mean for a patient going through a health check; it critically impacts on the final cardiovascular risk score. If an average cholesterol value is used, the risk may be inaccurate. If no value is given, there may be no risk score at all. Something that was of great concern to me was the absence of data, particularly coming from GP clinical systems. In a lot of cases, ethnicity was missing and sometimes the clinical risk factor profiles weren’t complete. A lot of the data wasn’t nearly as well recorded as it ought to be.

Q: Do these findings speak to others that have recently been published in relation to the NHS Health Check?

A: The study is an important piece of the puzzle and should be regarded alongside other work that also specifically looks at the NHS Health Check. For example, the work of John Robson and others at Queen Mary University of London and that of Kiara Chang and colleagues, also from Imperial College, has focused on the initiative’s effect on premature mortality. We’ve come in at a slightly different angle and emphasised the effects that the programme has on health inequalities. That said, this research should all be regarded as part of the same conversation.

Q: What do you see as being the implications of this study?

A: The NHS Health Checks are coming in for a lot of scrutiny. This is probably one of the largest studies done on the programme and it shows that providing health checks in community settings is a viable option. Essentially, if you want to reduce health inequalities, it looks as though this may be a way to do it. In terms of the lasting implications, it depends how policy makers want to deliver the programme; if they want to deliver it equitably to all, I don’t see a problem with doing so through primary care. However, if you want to target certain populations more than others – vulnerable and at-risk ones for example – then we’ve shown that a more innovative and community-minded approach is the way to go.